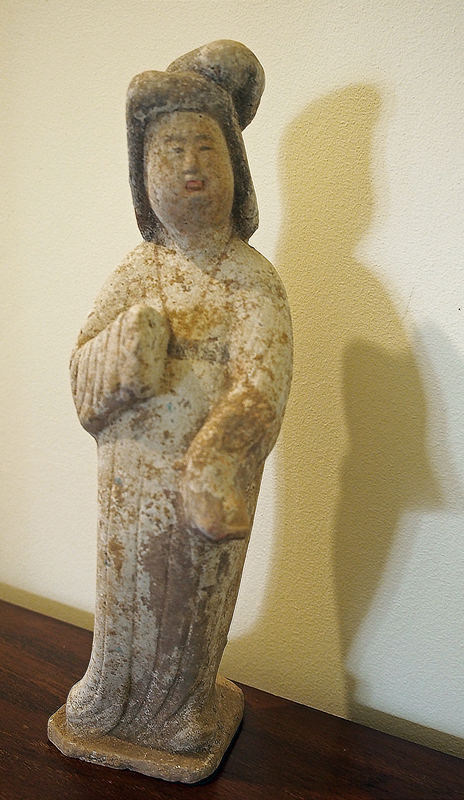 My acquisition story begins in Hong Kong in 2007. My low-fired, earthenware figurine was most likely moulded from several pieces luted together and covered in a white slip.  Her function was as a burial and status item (or mingqi) to accompany the deceased into the afterlife. Such figures were not required to have strength or durability as they were tomb items. They were generally crafted in huge quantities for those of high status or those who could afford them in and  around the Tang  (618-906 CE) capitals of Chang’an (Xian) in Shaanxi province and Luoyang in Henan province. However, these wares had little value to Chinese collectors prior to the end of the 19C as they were funerary items and considered unlucky. This attitude changed as Western collectors became more interested in such wares.

Once my purchase was home, I began to examine her more closely and to wonder about her. Could I authenticate my purchase? Provenance, of course, is paramount. I had requested and received a certificate of authenticity at the time of purchase, which stated she was made over 100 years ago and made in the Tang Dynasty. Therefore, she could be either 19th or 20th century or Tang!

Next, I looked for stylistic clues such as proportions, patina, motifs and physical attributes of the claimed period. She is 34 cm but standing human figures were made ranging from 10 to 110 cm, size being officially dictated according to the deceased person’s rank and status. Her patina is soft with no sharp edges and her clothing is typical of the later Tang period with a V-necked bodice, a high -waisted, long flowing skirt and full loose sleeves. Her hair style resembles the ‘just fallen off a horse’ look, popularised by the favourite concubine of the Emperor Xuanzong, Yang Guifei. Her face, cheeks and lips bear traces of coloured pigment but her facial features are not as refined as other pieces I have seen. She is also fashionably plump conforming stylistically with later pieces.

Lastly, I realized that perhaps scientific analysis using Thermo luminescence (TL) could be used in conjunction with X-Ray to reassure me. As this is quite costly, I did not undertake the process at the time although I have recently heard of a place in Australia where I could get this done. Unfortunately, fakers can assemble various broken parts to make one piece, or more worryingly, take one genuine piece and fake the rest. Forgers also know where samples are taken and could insert Tang Dynasty clay in specific places. Unfortunately, it appears there is no entirely accurate test for forgeries. It has also been reported that 80% of Chinese goods for sale in Hong Kong are fake.

So what is the verdict? Is this a case of caveat emptor? It would be great to know it is a genuine piece but whatever the outcome, I still like her and enjoy looking at her every day.

Page load link
Manage Cookie Consent
To provide the best experiences, we use technologies like cookies to store and/or access device information. Consenting to these technologies will allow us to process data such as browsing behavior or unique IDs on this site. Not consenting or withdrawing consent, may adversely affect certain features and functions.
Manage options Manage services Manage vendors Read more about these purposes
View preferences
{title} {title} {title}
Go to Top